According to Alejandro Fosk, Senior Vice President for Comscore in Latin America, the historic year that we have been living because of COVID-19 has made all things digital a key component in everyone’s lives. Fosk expressed that “capturing the persons’ online behavior implies understanding trends that will probably persist over time.”

Meanwhile, Gustavo Sambucetti, President of the Argentine Chamber of Electronic Commerce, commented on how users increased their online purchases, while others ventured on it for the first time. “Two out of three users are new. On one side, there were customers who regularly made online purchases and started to buy online in more categories. On the other side, there were first-time customers who had never made online purchases and started doing it because of being forced by the pandemic, the quarantine, and the need of acquiring different kinds of products or services,” said Sambucetti.

ComScore’s study revealed that, when the restrictions caused by the pandemic began, there was an increase on page views’ numbers, with Argentina, Perú, and Chile as the three Latin American countries that stood out the most. Of these three, Chile had the biggest digital audience growth by 7%, which doubles the increase registered in other Latin American countries. Meanwhile, in Perú there was a 3% increase, going over countries like Colombia, Argentina, and México, which had a 2% increase.

“The trend is clear: Perú has a larger average growth than other countries because we [Perú] were more left behind,” said Daniel Falcon, CEO of Neo Consulting. Falcón considers that the large growth in Perú —in comparison to other regions— is also happening because of the low consumption levels that digital channels had before the pandemic.

Regarding the usage of tech gadgets to use the internet or social media, Comscore discovered that Peruvians do it mostly from desktop computers; while in Brazil, smartphones dominate that area.

For 2021, because of the pandemic, the expected trend is that digital consumption will continue to rise, and that the importance of social media will be highlighted beyond a communication form between users. Sambucetti said the following about that:

“There is no longer any business that thinks that e-commerce or digital interactions are something marginal. Social media had an important peak by going from its sole role as a communication tool to take over a transactional role.”

Another finding from Comscore’s study and that marks a difference in the Peruvian audience from the rest has to do with the social media usage. In Perú, Facebook prevails against the other social media channels with 72%. Instagram follows in a second place with an interactions’ share of 21.5%, which represents a significant distance between both platforms. According to Falcón, “[Facebook] is a channel for mostly adults and older adults, since young people can be found in Tiktok and Instagram”.

Falcón also mentioned that the differences in terms of digital consumption between Latin American countries are decreasing. In fact, he predicts that from now on this will be the trend, since there isn’t much difference anymore between Perú, Colombia, and Chile by being in more similar levels. Falcón also expressed that even though Argentina and Brazil are way ahead, it’s important to take into consideration that “Perú has been very left behind in digital commerce and online education, yet very advanced in social media usage.”

Without a doubt, digital consumption is in an all-time high, despite the challenges that these new pandemic times have imposed.

To read the full article in Spanish, click here.

Are you looking to take your business to the digital transformation? Click here and learn how we can help you implement digital solutions.

According to Nucleus Research, Zoho has shown high levels of performance that sets it up for continuous success in 2022 and beyond. 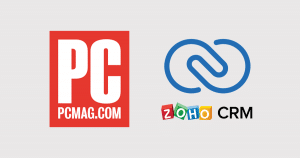 CRM in 2022: Trends and Predictions

In this article (which has already become our annual tradition), we’ll show you what’s in store for Customer Relationship Management.